To catch you up:

Summer in Scandinavia Part 1: Gear Up and Go!

Summer in Scandinavia Part 3: This Is the Way We Board the Plane

Summer in Scandinavia Part 6: Hygge With A Chance Of Downpour Part 1

What’s a week in Scandinavia’s long summer days without a little rainstorm?  Both times we’ve been to Denmark in August we’ve had some rain, but this time around it was serious business.  The first full day we were wandering around town the skies decided to open up and absolutely dump rain on us as we made our way back to the condo.  Full on clothes-soaking, just have to give up and laugh, raining.  Some of our clothes never really did recover, but sometimes you just have to accept that there will be sacrifices to the travel Gods along the way.

Thankfully, this wasn’t the case for the entire time, just light showers here and there the next day which didn’t stop us for getting out and around in the city.  However, Baby Flyer had her own plans.  Not only was she too proud to ride in the stroller most of the time, even though we’d thoughtfully gotten a nice rain cover for it, she also wanted to hold her own umbrella.

So, while all the (seemingly) well behaved Danish kids were quietly bundled up in their strollers, we were chasing our fiercely independent American child down the cobblestone sidewalks of central Copenhagen, in the rain, trying to get our umbrella back. 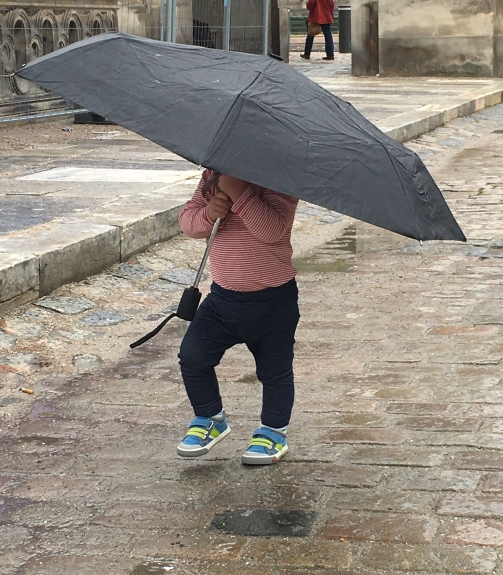 In retrospect, it was one of the cutest moments of the week, and we weren’t the only ones who felt this way.  We’re pretty sure Baby Flyer and her umbrella made it into quite a few people’s European vacation photos.

We took our time exploring the city, hitting some of the attractions, as well as a few old and new favorite restaurants and casual dining spots.  First, and most convenient was a stop by Torvehallerne in Norreport.  It’s a year-round market of kinds that includes shops selling vegetables, olive oils, deli meats, and wine, as well as some small restaurants and bars.  One of the most popular booths is definitely for smorrebrod, which is about as Danish as you can get.  It translates to ‘buttered bread,’ but is really a variety of open faced sandwiches with all manner of toppings that can stack up several inches.  One piece makes a perfect lunch, and a glass of wine to go with doesn’t hurt.

We also treated ourselves to a couple of nights out at some of the wonderful spots by our flat as well.  Just downstairs was a French restaurant called Honen & AEgget (roughly translated- chicken and egg!)  Along with a cozy atmosphere, the food was great, and the service was extremely friendly.  We went more than once.

Our last night, we did things properly and had a true Danish meal out at Vaskt in Centrum.  This place is 100% scandi – cozy, just formal enough, farm to table, and homey yet decorative presentation.  Yes, we think we at the garnishes here too, but we regret nothing. 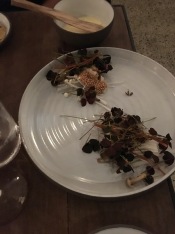 With all that food, we needed to get out and cycle it off.  This is Denmark, and really the only way to get around is by bike.  Plus, Baby Flyer was much more amenable to sitting in a kid’s seat on the bike than in her stroller.  There are various bike sharing systems in Copenhagen, but since we needed to rent the kids’ seat and helmet, we headed to Osterport to a rental shop.  In just a few minutes, we were on our way!  As a sidenote, it took us awhile to find the place- it’s actually down a ramp/stairs closer to the metro tracks.

Baby Flyer LOVED it, and was inspired to try it on her own when she found a bike her own size in the courtyard of our flat.

She is Danish now!

Now, as promised, we also spent a fair amount of time exploring the playgrounds around Copenhagen.  As a general rule, most of the larger playground designs that we commonly see in the US are designed by, or have their roots in, Danish companies.  They also are responsible for Legos, among other long lasting kid’s favorites.

What was funny, then, was that the playgrounds in Denmark don’t look a whole lot like ours, even our ‘good’ ones!  In Copenhagen, the parks are largely more natural- wood elements, terrain, bridges, and structures that in the US might make parents edgy – high ropes, BIG slides.

The first one we stumbled on was just across the lakes from our flat.  A small, but imaginative local playground with ‘grass’ mounds, wooden planks, and a vaguely nautical theme.  It was off the beaten path a little, so we had it to ourselves most of the time.

We of course also spent some time at the iconic playground in the ‘King’s Garden‘ park in the center of town.  This playground was not only lots of fun, but really beautifully designed.

It was nearly entirely made of wood structures.  Really, nothing overly ‘fancy’ but everything functional and inspiring to the imagination. 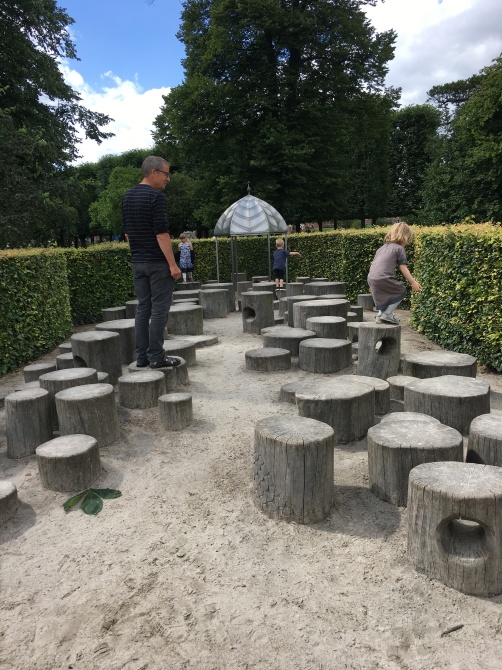 It’s always interesting to go to some of the ‘local’ family spots on vacation to get a dose of everyday culture.  What we definitely kept seeing across Scandinavia was the independence of the kids (once they were out of their strollers).  Parents kept a watchful eye, but let their kids play more or less on their own.  This park was also perfect for that since most of the elements were simple and kids over 2 or 3 didn’t need assistance to get to anything.

The King’s Garden itself was beautiful in Summer, especially after the rain.  The Danes both design, and use, their common spaces well.  On a nice summer weekend it can feel like the whole city is just out for a day in the park.  It’s not uncommon to see groups with elaborate picnics, complete with music and drinks. 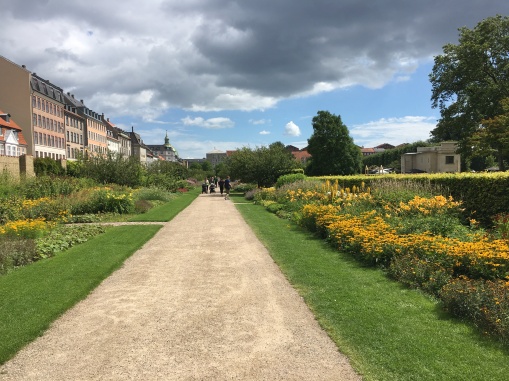 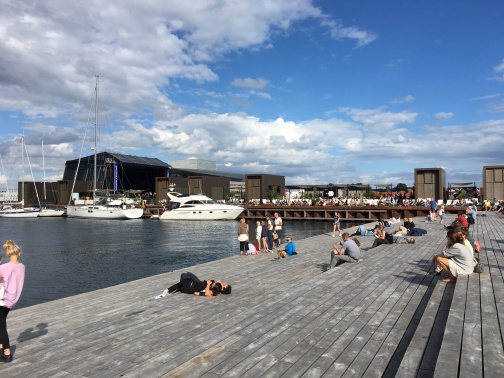 All in all, we packed a lot into our four days in Copenhagen.  As always, you have to be flexible and keep your expectations simple when traveling with little ones, but the memories are worth it. 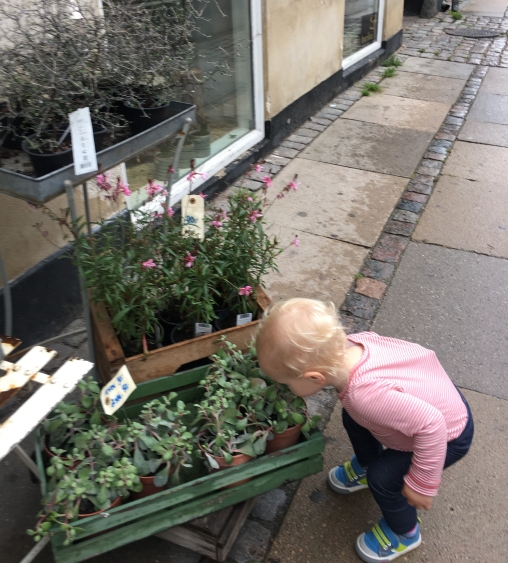 Stopping to smell the flowers

Too soon, it was time to pack up again and say ‘see you next time’ to Denmark.  We had to start the long journey home to California.

Up next- All Good Things Must End – Hej Hej, Danmark – Kobenshavn Lufthavn to LAX”

2 thoughts on “Summer in Scandinavia Part 6 – Hygge With A Chance of Downpour, Part 2”